What are Cataracts & Some Natural Treatments 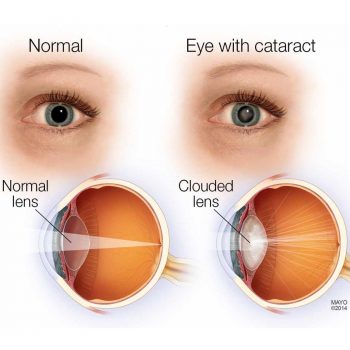 What’s it like to have cataracts?
Imagine looking at everything through a fogged-up window and you’ll have somewhat of any idea what a cataract sufferer deals with.

What causes cataracts?
It’s not just aging. Poor lifestyle choices and other chronic health conditions can be contributing factors. The most common treatment for cataracts that impair vision is to have them surgically removed, but is surgery absolutely necessary? Research in 2015 is pointing toward an even simpler solution — eye drops that contain an organic compound that dissolves what forms cataracts in the first place. There are also scientifically backed and natural ways to prevent cataract formation, like getting a higher dietary intakes of eye vitamins from food and supplements. So yes, there are natural ways that you can prevent and slow the progression of these blurry-vision invaders and keep cataract symptoms at bay.

What Are Cataracts?
To put the cataract definition into simple terms — a cataract is a clouding of the eye’s natural lens. Cataracts are the most common cause of vision loss in people over 40. They’re also the main cause of blindness around the world.

Around the not-so-old age bracket of the mid-40s, the human eye begins to experience biochemical changes involving the proteins within its lens. These proteins harden and lose elasticity, which can then lead to vision problems. One of the most common examples of this phenomenon is far-sightedness or the need for reading glasses in most people as they get older. For some, the proteins in the lens (specifically the alpha crystallins) may clump together, forming cloudy areas on the eye lens called cataracts.

What is the lens, and why is it important?

The lens, which lies behind the iris and the pupil, is a clear part of the eye that helps us to focus light or an image on the retina. The retina is the light-sensitive tissue located at the back of the eye. In a healthy eye, light passes through the transparent lens to the retina. When the light reaches the retina, it’s changed into nerve signals that are sent to the brain. In order to see a clear image, your eye’s lens must be clear. When the lens is literally clouded by a cataract, you end up seeing an inaccurate, blurred image.

Cataracts don’t appear out of nowhere. Typically, it takes them several years to slowly develop. The density and location of a cataract determine the way in which it blocks the passage of light through the eye lens. A noticeable cataract blocks the transmission of light to the point that the formation of images on the retina are affected and your vision becomes generally foggy.

There are three different types of cataracts, named according to their locations:

Cataracts can also be classified by cause:

When you first start to develop a cataract, it might only change the vision in just a small area your eye. You might not even notice that you have any vision loss. However, as the cataract grows larger, it clouds more of your eye’s lens, and the cataract symptoms become more obvious.

Cataract symptoms can vary due to the location of the cataract in the eye (nuclear, cortical or posterior subcapsular).

Cataract Misconceptions
There are some common misconceptions when it comes to cataracts. It’s good to know that a cataract is not a film over the eye. It’s not caused by overusing the eyes and cannot be spread from one eye to the other. It’s also not a cause of irreversible blindness since surgery can remove cataracts.

Cataract Causes and Risk Factors
There are many factors that put people at risk for cataracts, including:

Age —Aging is definitely the primary risk factor and cause of cataracts. The older you are, the more likely you are to have cataracts. Pretty much anyone who lives into elderly years will develop cataracts to some degree.
Gender — Women have a higher risk than men.
Race and ethnicity — African-Americans have nearly twice the risk of developing cataracts as Caucasians. This is likely because African-Americans are more likely to have diabetes, a risk factor for cataracts. Hispanic Americans are also more likely than Caucasians to develop cataracts.
Family history — Cataracts tend to run in families.
Glaucoma — Glaucoma and glaucoma treatments create higher cataract risk. The glaucoma drugs that can increase risk for cataracts include demecarium (Humorsol), isoflurophate (Floropryl) and echothiophate (Phospholine).
Myopia — Nearsighted (myopic) people are at greater risk.
Uveitis — This rare chronic inflammation in the eye often caused by an autoimmune disease or response creates a high risk for cataracts.
Previous physical injury or surgery — A significant physical injury to the eye or intraocular eye surgery increases risk.
Diabetes — Type 1 or 2 diabetics are at very high risk for developing cataracts and much more likely to develop them younger.
Obesity — Often associated with type 2 diabetes type, it may also be a risk factor for cataracts.
Autoimmune diseases and conditions requiring steroid use — Autoimmune diseases like rheumatoid arthritis, psoriasis, multiple sclerosis and other medical conditions that need long-term steroid use can increase cataract likelihood.
Overexposure to sunlight — Being exposed to UVB radiation from sunlight increases the risk for cataracts, especially nuclear cataracts. The risk may be greatest among people who had significant sun exposure in their youth. Having a job that requires prolonged exposure to sunlight also increases risk.
Smoking and alcohol use — Smoking a pack a day of cigarettes doubles the risk of developing cataracts. Chronic heavy drinkers are also at great risk for cataracts and other eye problems.
Environmental factors — Long-term environmental lead exposure may increase the risk of developing cataracts. Gold and copper accumulation may also cause cataracts. Prolonged exposure to ionizing radiation (such as X-rays) can increase cataract risk.

Natural Cataract Symptoms Prevention and Treatment
It’s said that cataracts aren’t completely preventable, but everyone seems to agree that their occurrence can definitely be delayed. And some health professionals and scientists do believe that cataracts can be prevented.

1. Diet
The more antioxidants you can get from consuming fruits and vegetables, the better your chances are of warding off cataract develop. The lens of the eye contains protective enzymes that ideally break down proteins that can clump together and form cataracts. By consuming more high-antioxidant foods, you protect your eyes from oxidative stress that contributes to cataracts. Antioxidants also help to maintain the enzymatic pathways that prevent cataract formation.

Fresh fruits and vegetables — In general, fresh fruits and vegetables are excellent for eye health. Fruits and vegetables have high levels of important plant chemicals called phytochemicals. The phytonutrients are antioxidants and anti-inflammatory agents that have been shown to help prevent or delay the progression of eye disease, including cataracts. Studies have also shown that vegetarians and vegans have a significantly lower risk of cataracts than meat eaters, predominantly in the elderly. However, the research does not show that eating meat promotes cataracts — rather that eating a lot of vegetables is protective to eye health.
Vitamin A (beta-carotene)-rich foods — Vitamin A has been shown to prevent loss of vision caused by degenerative conditions like cataracts and macular degeneration. A lack of vitamin A causes the cornea to become very dry, which can lead to clouding of the front of the eye, corneal ulcers and vision loss. Vitamin A deficiency can also damage the retina, which also contributes to blindness. (13) Carrots, sweet potatoes and dark leafy greens are some great choices to get more of this vision-improving nutrient.
Vitamin C-rich foods — Vitamin C intake has been linked to a lower cataract risk, especially in people who tend to be deficient in this key nutrient.  Excellent vitamin C foods include peppers, citrus fruits, berries, tropical fruits, broccoli and tomatoes.
Vitamin E-rich foods — Studies have shown that vitamin E reduces cataract formation.  The top 10 vitamin E food sources include almonds, spinach, wheat germ and sweet potato.
Zinc-rich foods — According to the American Optometric Association, zinc deficiency has also been tied to cloudy vision and poor night vision since it helps bring vitamin A from the liver into the retina. Grass-fed beef, kefir, yogurt, chickpeas and pumpkin seeds all rich in zinc.
Lutein and zeaxanthin — These are the two carotenoids that have been most studied for cataract prevention. They are super antioxidants found together in many vegetables. They’re also found together in the lenses of the eyes. Lutein and zeaxanthin filter harmful high-energy blue wavelengths of light and help protect and maintain healthy eye cells. One study found that people with diets high in foods rich in zeaxanthin, particularly spinach, kale and broccoli, are up to 50 percent less likely to develop cataracts. Other foods rich in lutein and zeaxanthin include eggs, collard greens, turnip greens and corn.
Fish and omega-3 foods — Regularly eating fatty fish like salmon and other foods like chia seeds that are rich omega-3 fatty acid, has been linked to a potentially reduced risk of cataracts or their progression.  One study found that women who ate fish at least three times a week rather than less than once a month lowered their risk of cataracts, and overall, total fish intake was inversely associated with cataract formation.

3. Sun Protection
UV light exposure can oxidize proteins in the eye, changing their structure and contributing to cataract development. Increased exposure to sunlight has been linked to increased cataract risk. (20) Wearing sunglasses and a hat with a brim to block ultraviolet sunlight can help delay the formation of a cataract.

Protective sunglasses don’t have to be expensive, but opt for ones that block 100 percent of UV rays. While it’s a good idea to limit daily exposure to computers and other devices that give off blue light, it’s important get some light from the sun each day for the sake of your eyes and overall health.

4. Lifestyle Modifications
Decreasing alcohol consumption and quitting smoking are two lifestyle choices that can majorly decrease your cataract risk. Studies have shown that daily consumption of one or more alcoholic drinks was associated with a modest increase of risk for cataract, but this risk increased with greater alcohol consumption.

Smoking has a negative effect on every aspect of health, including eye health. Smoking definitely contributes to cataract development. Research has shown that if you stop smoking, you don’t necessarily lower your risk of cataracts, but you do stop accumulating greater risk. If you haven’t quit already, here is yet another reason to stop now.

5. Eye Drops
In the future, a simple and non-invasive treatment for cataracts might be eye drops. Researchers have discovered that an organic compound called lanosterol can improve vision by dissolving the clumped proteins that form cataracts.

In a recently published study conducted at the University of California, eye drops containing lanosterol completely cleared the vision of three dogs with naturally occurring cataracts after six weeks of treatment. The eye drops need several more years of human studies and likely might not work on aggressive cataracts, but hopefully they might become another option for cataract treatment in the near future.

You’re never too young (or old) to start taking preventative measures against cataracts so start today no matter your age!

Article by: Dr Z Up until recently, the true significance of vitamin D has been relatively uncovered. Traditionally, because it is well known for assimilating calcium from the foods that we eat, vitamin D is usually associated with being essential for bone health. Today, however, researchers are discovering that it can help protect against a host ...