The Miraculous Benefits of Resveratrol 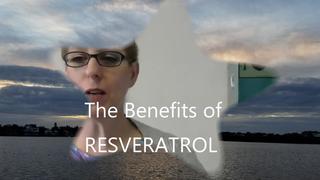 Resveratrol is a phytoalexin, a class of compounds produced by many plants when they are infected by pathogens or physically harmed by cutting, crushing, or ultraviolet radiation.

What are the benefits of Resveratrol?

Resveratrol has many health benefits but the simplest way to describe it as a supplement that nourishes the Mitochondria in the body. It seems to roll back the effects of aging on the cells.

Here are a few of the major things we covered in this video:

Pre-conditions the heart and brain from damage caused by strokes and heart attacks. Does this by raising the activity of heme-oxygenase, a protective antioxidant enzyme that is usually activated after heart attacks and strokes. This means individuals can sustain a heart attack or stroke and suffer small or no adverse consequences.*

Prevents blood clots that cause strokes and heart attacks by inhibiting the enzyme phosphoinositide 3-kinase.

Blocks fatty acid synthase, an enzyme responsible for the conversion of sugar to fat. Resveratrol also inhibits lipase, the enzyme that helps to absorb fat from the digestive tract.

Activates a DNA-repair survival gene called Sirtuin 1 that mimics the beneficial effects of calorie restriction. Produces health without having to deprive oneself of food.*

Resveratrol works as an Antidepressant

Works as an anti-depressant by inhibiting the enzyme monoamine oxidase (MAO inhibitor).*

Resveratrol Works as and Anti-inflammatory Agent

Inhibits the enzyme cyclooxygenase, making it an anti-inflammatory agent (COX-2 inhibitor), without the typical side effects seen with Cox-2 inhibiting drugs.

Resveratrol also lowers homocysteine, an undesirable blood protein.
Prevents blood clots, bacteria, viruses, cancer cells, and cholesterol plaque from sticking to the inside wall of arteries by an anti-adhesion factor, thus preventing the spread of cancer and infection.*

Eradicates brain plaque called beta-amyloid, believed to be involved in Alzheimer’s disease. It does this at very low concentrations (millions of a milligram).

Rescues the liver from a condition known as fatty liver despite a high-fat diet or alcohol consumption. 35% of Americans have fatty liver.

Inhibits the effects of excitoxins like glutamate on the brain. (MSG toxicity)*

Resveratrol inhibits telomerase, the enzyme responsible for shortening the end caps of chromosomes.*

Resveratrol Ha Been Studied on Cancer Cells and Viruses

Resveratrol acts as an antibiotic against bacteria and is said to exhibit strong antibacterial activity against antibiotic-resistant bacteria (vancomycin-resistant Enterococci and methicillin-resistant Staphylococcus aureus (MRSA).

Resveratrol exhibits strong action against all manner of viruses, including the herpes virus (infects 80% of mankind), influenza virus, and Human Immunodeficiency Virus (HIV).

Resveratrol is an anti-fungal agent on the grapevine and in the human body and is active against Candida albicans.*

Resveratrol is found in that berries, including:

Resveratrol effects the Hormones in the body

It helps lessen the side effect associated with Menopause.

It supports the new cell growth of glands all over the body. Especially protective for the Thyroid and Pancreas.

Is there Resveratrol in wine?

I listen to a lot of videos by Dr. Eric Burg. I have learned from him that there is a little Resveratrol in red wine. But does that mean it is good for you? Not really, Alcoholic beverages hit your insulin receptors 3 times as hard as eating straight sugar or drinking a sugar ladened soda. The 2nd piece of is that Alcoholic beverages take a hit on the liver. The damage that one glass of wine causes to the liver may cause the liver up to a week to repair. The conclusion being that the amount of Resveratrol in a glass of red wine is not worth the damage that the Alcoholic beverage does to your body.

Is drinking wine before bed healthy?

Not really – it hits your body like a sugar making your body work on insulin management instead of healing the cells.

A nice herbal tea before bed would be a much healthier choice.

Our Products Available with Resveratrol in them:

It's About Recovery - Athletic Recovery

By Dr Jerry Petermann ND Okay, let’s talk about Recovery…. No, not THAT Recovery….recovery from athletic competition and general strenuous physical exercise. Resveratrol Helps with Athletic Recovery Ask any competitive runner, “What is the one thing that keeps you from improving your times?” and they will tell you, “Recovery ...